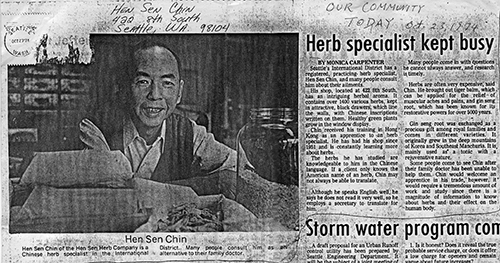 Seattle's International district has a registered, practicing herb specialist, Hen Sen Chin, and many people consult him about their ailments.

His shop, located at 422 8th South, contains over 1400 various herbs, kept in attractive, black drawers, which line the walls, with Chinese inscriptions written on them. Healthy green plants grow in the window display.

Chin received his training in Hong Kong as an apprentice to an herb specialist. he has had his shop since 1951 and is constantly learning more about herbs.

The herbs he has studied are knowledgeable to him in the Chinese language. If a client only knows the American name of an herb, Chin may not always be able to translate.

Although he speaks English well, he says he does not read it well, so he employs a secretary to translate for him.

Many people come in with questions he cannot always answer, and research is timely.

Herbs are often very expensive, said Chin. He brought out tiger balm, which can be applied for the relief of muscular aches and pains, and gin seng root, which has been known for its restorative powers for over 5000 years.

Gin sengs root was exchanged as a precious gift among royal families and comes in different varieties. It originally grew in the deep mountains of Korea and Southeast Manchuria. It is mainly used as a tonic with a rejuvenative nature.
Main Menu
Help
My Account
Contact Us
337 Park Ave N
Renton ,
WA
98057
ph. 206 328-2828
service@hensenherbs.com