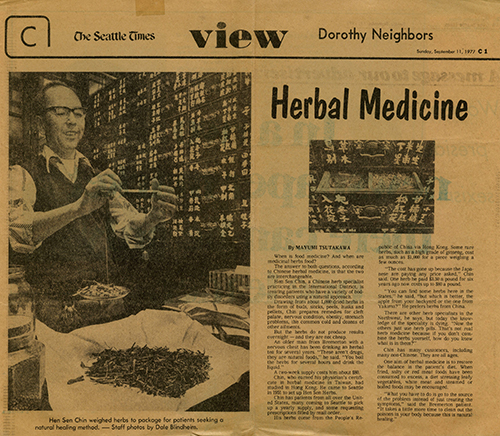 When is food medicine? And when are medicinal herbs food?

The answer to both questions, according to Chinese herbal medicine, is that the two are interchangeable.

Hen Sen Chin, a Chinese herb specialist practicing in the International District, is treating patients who have a variety of bodily disorders using a natural approach.

Drawing from about 1,000 dried herbs in the form of buds, sticks, peels, husks and pellets, Chin prepares remedies for cleft palate, nervous condition, obesity, stomach problems, the common cold and dozens of other ailments.

But the herbs do not produce results overnight - and they are not cheap.

An older man from Bremerton with a nervous chest has been drinking an herbal tea for several years. "These aren't drugs, they are natural foods," he said. "You boil the herbs for several hours and drink the liquid." A two-week supply costs him about $80.

Chin, who earned his physician's certificate in herbal medicine in Taiwan, had studied in Hong Kong. He came to Seattle in 1951 to set up Hen Sen Herbs.

Chin has patients from all over the United States, many coming to Seattle to pick up a yearly supply, and some requesting prescriptions filled by mail order.

His herbs come from the People's Republic of China via Hong Kong. Some rare herbs, such as a high grade ginseng, cost as much as $1,000 for a piece weighing a few ounces.

"The cost has gone up because the Japanese are paying any price asked," Chin said. One herb he paid $3.50 a pound for six years ago now costs up to $80 a pound.

"You can find some herbs here in the States," he said, "but which is better, the apple for your backyard or the one from Yakima?" He prefers herbs from China.

There are other herb specialists in the Northwest, he says, but today the knowledge of the specialty is dying. "Now the others just use herb pills. That's not real herb medicine because if you don't combine the herbs yourself, how do you know what's in them?"

Chin has many customers, including many non-Chinese. They are all ages.

One aim of herbal medicine is to restore the balance in the patient's diet. When fried, salty or red meat foods have been consumed to excess, a diet stressing leafy vegetables, white meat and steamed or boiled foods may be encouraged.

"What you have to do is go to the source of the problem instead of just treating the symptoms," said the Bremerton patient. "It takes a little more time to clean out the poisons in your body because this is natural healing."