Subtotal
$0.00
Checkout
For Herbalist, A Tongue Tells No Lies 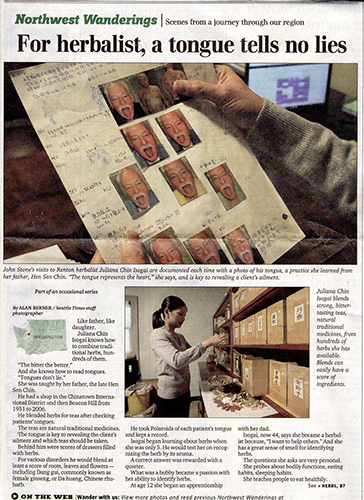 "The bitter the better."

And she knows how to read tongues.

She was taught by her father, the late Hen Sen Chin.

He had a shop in the Chinatown International District and then Beacon Hill from 1951 to 2006.

He blended herbs for teas after checking patients' tongues.

The tea are natural traditional medicines.

The tongue is key to revealing the clients's ailment and which tea should be taken.

Behind him were scores of drawers filled with herbs. 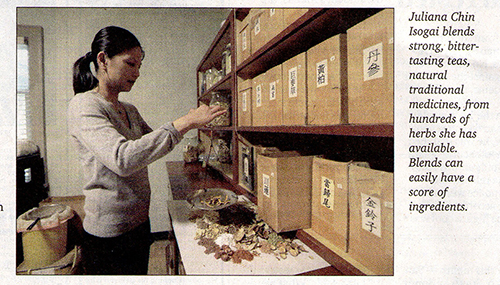 Juliana Chin Isogai knows how to combine traditional herbs, hundreds of them.

For various disorders he would blend at least a score of roots, leaves and flowers - including Dang gui, commonly known as female ginseng, or Da huang, Chinese rhubarb.

He took Polaroids of each patient's tongue and kept a record.

Isogai began learning about herbs when she was only 5. He would test her on recognizing the herb by its aroma.

A correct answer was rewarded with a quarter.

What was a hobby became a passion with her ability to identify herbs.

At age 12 she began an apprenticeship with her dad.

Isogai, now 44, says she became a herbalist because, "I want to help others." and she has a great sense of smell for identifying herbs. 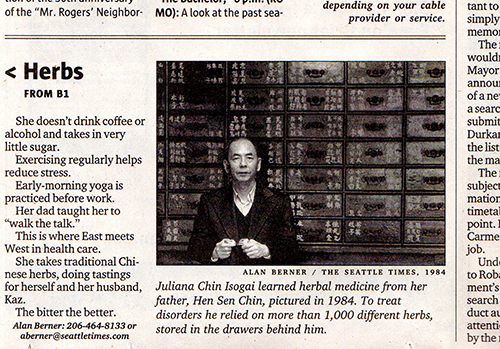 The question she asks are very personal.

She teaches people to eat healthily.

She doesn't drink coffee or alcohol and takes in very little sugar.

Early-morning yoga is practiced before work.

Her dad taught her to "walk the talk."

This is where East meets West in health care.

She takes traditional Chinese herbs, doing tastings for herself and her husband Kaz.

The bitter the better.