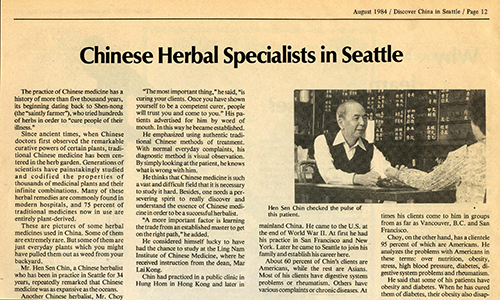 The practice of Chinese medicine has a history of more than five thousand years, its beginning dating back to Shen-nong (the "saintly farmer"), who tried hundreds of herbs in order to "cure people of their illness."

Since ancient times, when Chinese doctors first observed the remarkable curative powers of certain plants, traditional Chinese medicine has been centered in the herb garden. Generations of scientists have painstakingly studied and codified the properties of thousands of medicinal plants and their infinite combinations. Many of these herbal remedies are commonly found in modern hospitals, and 75 percent of traditional medicines now in use are entirely plant-derived.

These are pictures of some herbal medicines used in China. Some of them are extremely rare. But some of them are just everyday plants which you might have pulled them out as weed from your backyard.

Mr. Hen Sen Chin, a Chinese herbalist who has been in practice in Seattle for 34 years, repeatedly remarked that Chinese medicine was as expansive as the oceans.

Another Chinese herbalist. Mr. Choy Kai Chiu, explained Chinese medicine as originating in the defensive action by our ancestors in their struggle against diseases.

Chin said that when he first began practicing in Seattle, there was another Chinese herbalist, named Wu. Now the number of herbalists has doubled or tripled. 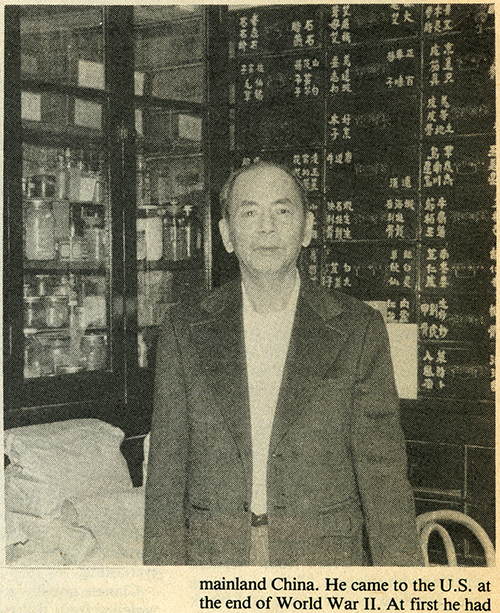 Most people here are covered by medical insurance, but some resort to Chinese herbalists when they do not receive the desired treatment from doctors.

Choy pointed out that the characteristic of Chinese medicine is that it not only attacks the symptoms but also the source. Chinese medicine adopts and overall treatment, dealing with a particular weakness in the body, but changing the body constitution as well, to strengthen its defense against diseases.

He quoted as an example a patient of his who had been afflicted with sinusitis for more than ten years. In the end he came to Choy and was completely cured. Choy is a specialist in treating sinusitis

Chin recalled the early days when he had to establish his credibility. The patients who sought help from Chinese herbalists for the first time would have a skeptical attitude.

"The most important thing," he said, "is curing your clients. Once you have shown yourself to be a competent curer, people will trust you and come to you. "His patients advertised for him by word of mouth. In this way he became established.

He emphasized using authentic traditional Chinese methods of treatment. With normal everyday complaints, his diagnostic method is visual observation. By simply looking at the patient, he knows what is wrong with him.

He thinks that Chinese medicine is such a vast and difficult field that it is necessary to study it hard. Besides, one needs a persevering spirit to really discover and understand the essence of Chinese medicine in order to be a successful herbalist.