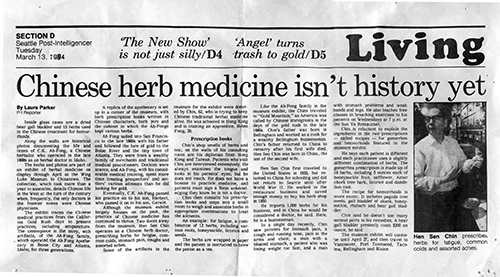 Inside glass cases are a dried bear gall bladder and 15 herbs used in the Chinese treatment for hemorrhoids.

Along the walls are historical photos documenting the life and times of C.K Ah-Fong, a Chinese herbalist who operated in the late 1800s as an herbal doctor in Idaho.

The herbs and photos are part of an exhibit of herbal medicine on display through April at the Wing Luke Museum in Chinatown. The collection, which took more than a year to assemble, details Chinese life in the West at the turn of the century when, frequent, the only doctors in the frontier towns were Chinese physicians

The exhibit traces the Chinese medical practices from the California Gold Rush days to present practices, including acupuncture. The centerpiece is the story, with artifacts, of the Ah-Fong family, which operated the Ah-Fong Apothecary in Boise City and Atlanta, Idaho, for three generations.

A replica of the apothecary is set up in a corner of the museum, with herb prescription books written in Chinese characters, herb jars and the cabinet in which the Ah-Fongs kept various herbs.

Ah-Fong sailed into San Francisco in the late 1860s with his father and followed the lure of gold to the Boise River and the tiny town of Atlanta. They were from a wealthy family of merchants and traditional medical practitioners. doctors were scarce, and Ah-Fong, with his considerable medical training, spent more time treating prospectors' and settlers' various ailments than he did looking for gold.

Although the museum exhibit largely focuses on the past, the practice of Chinese medicine has continued to thrive. Two doors away from the museum, Hen Sen Chin operates as a Chinese herb doctor, prescribing herbs for fatigue, common colds, stomach pain, coughs and assorted aches.

Some of the artifacts in the museum for the exhibit were donated by Chin, 62, who is trying to keep Chinese traditional herbal medicine alive. He was schooled in Hong Kong and is training as apprentice, Helen Fong, 28.

Chin's shop smells of herbs and tea: on the walls of his consulting room are his diplomas from Hong Kong and Taiwan. Patients who visit Chin are interviewed extensively. He always examines the tongue and looks in his patients' eyes; but he does not touch. He does not have a license to practice medicine, and patients must sign a form acknowledging they know he is not a doctor. 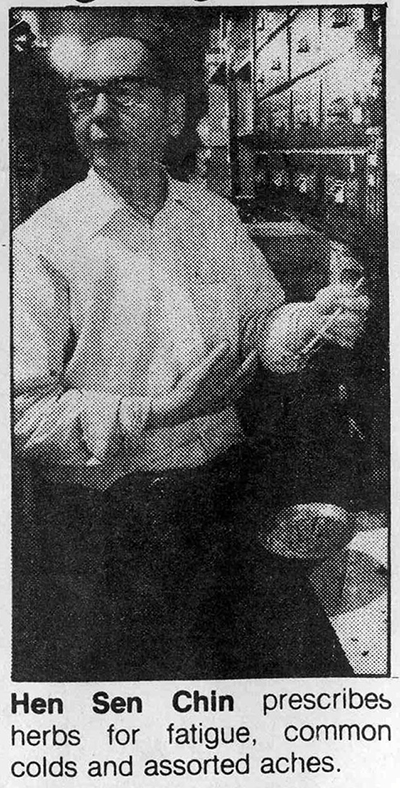 Chin then consults his prescription books and steps into a small room to weigh and assemble herbs in appropriate combinations to treat the ailments.

An example: for fatigue, a combination of 12 herbs, including various roots, honeysuckle, licorice and seeds.

The herbs are wrapped in paper and the patient is instructed to brew the potion as a tea.

Like the Ah-Fong family in the museum exhibit, the Chins traveled to "Gold Mountain," as America was called by Chinese immigrants in the days of the gold rush in the late 1880s. Chin's father was born in Bellingham and worked as a cook for a wealthy Bellingham businessman. Chin's father returned China to remarry after his first wife died. Hen Sen Chin was born in China, the son of the second wife.

Hen Sen Chin first traveled to the United States in 1933, but returned to China for schooling and did not return to Seattle until after World War II. He worked in the restaurant business and saved enough money to buy his herb shop in 1950.

H imports 1,000 herbs for his business, and in China he would be considered a doctor, he said. Here, he is a businessman.

In a single day recently, Chin saw patients for stomach pain, a cough and running nose, pain in the arms and chest, a man with a bloated stomach, a patient who was losing weight too fast, and a man with stomach problems and weak hands and legs. He also teaches free classed in breathing exercises to his patients on Wednesdays at 7 p.m. at the Sun Ya Restaurant.

Chin is reluctant to explain the ingredients in the two prescriptions - called recipes - for gonorrhea and hemorrhoids featured in the museum exhibit.

He says each patient is different and each practitioner uses a slightly different combination of herbs. The gonorrhea prescription is made up of 16 herbs, including 5 ounces of each of honeysuckle fruit, safflower, Amur chork tree bark, licorice and dandelion root.

Chin said he doesn't use many animal parts in his remedies. A bear gall bladder presently costs $200 an ounce, he said.