Natural and chemical-free products are the concern of today, and medical products are no exception. More and more people are seeking to treat their illnesses through “natural drugs” without chemicals, and many of them have found the answer, Chinese herbal medicine. 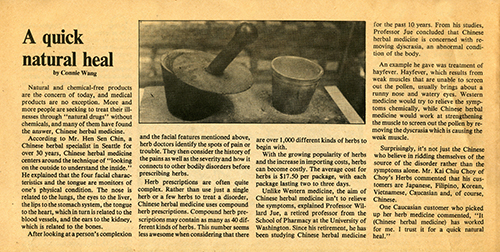 After looking at a person’s complexion and the facial features mentioned above, herb doctors identify the spots of pain or trouble. They then consider the history of the pains as well as the severity and how it connects to other bodily disorders before prescribing herbs.

With the growing popularity of herbs and the increase in importing costs, herbs can become costly. The average cost for herbs is $17.50 per package, with each package lasting two to three days.

An example he gave was treatment of hayfever. Hayfever, which results from weak muscles that are unable to screen out the pollen, usually brings about a runny nose and watery eyes. Western medicine would try to relieve the symptoms chemically, while Chinese herbal medicine would work at strengthening the muscle to screen out the pollen by removing the dyscrasia which is causing the weak muscle.

Surprisingly, it’s not just the Chinese who believe in ridding themselves of the source of the disorder rather than the symptoms alone. Mr. Kai Chiu Choy of Choy’s Herbs commented that his customers are Japanese, Filipino, Korean, Vietnamese, Caucasian and, of course, Chinese.

On Caucasian customer who picked up her herb medicine commented, “it (Chinese herbal medicine) has worked for me. I trust it for a quick natural heal.”
Main Menu
Help
My Account
Contact Us
337 Park Ave N
Renton ,
WA
98057
ph. 206 328-2828
service@hensenherbs.com